The secret and sinister madness

A stat holiday up here. I slept in so I didn't go to the pool. Who knows what would have been happening? But I knew when I got out of bed that I'd be going for a run, probably down into Fish Creek. It took a bit of puttering but I was finally out of the house at noon.

You see, there was this really really good coffee that just had to be savored. It's called CCC-XXX from Crickle Creek Coffee Company. They're a small shop in Priddis that does their own blending and roast, and then deliver it to your home. How cool is that? Check them out. Plus it was cold this morning and I wanted to give it a bit of time to get at least above zero.

Ran the same route as last week, down into Fish Creek, turning around at Bridge 7. I think it's 7, it's the one just before where the pathway splits to go up that horrible hill into Woodlands. Ran easy and steady the whole way. No niggles, just calves getting a bit tired towards the end. It felt pretty good. Ran 90 minutes, and again almost evenly split it, which isn't bad considering the way back is all uphill. Stretched and used the T ball on my feet, and that felt really good.

The adventure in Fish Creek was all the dog walkers. It's like there was a secret meeting and they all decided they were British or something, and were going to keep left. No idea why. Maybe just to mess with runner's heads. One person saw me coming, rounded up their small herd, walked from their right side of the path to their left side of the path, scrunched up against a small tree and took up half the path. If they'd stayed where they were they would have had all the space in the world. One guy was backing up the path to take a photo or something of his doggy buddies in the middle of the intersection. He wasn't paying attention to anything I said, and none of the other people said anything. I ended up putting my hand on his backpack to keep him from taking me out. At least there was an apology in the wind behind me. I want to get a run shirt that says "Keep Right, Dammit!" Front and back.

Here's a picture of a Yum Bakery tart. Just because. I think is from last weekend and I haven't downloaded my phone for a while. 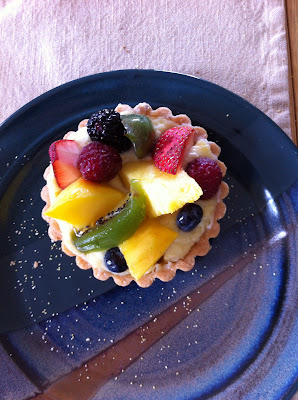 Taking the trainer tire off gave me this minor scrape when the stupid plastic tire iron slipped out at just the wrong time. Not a big deal. 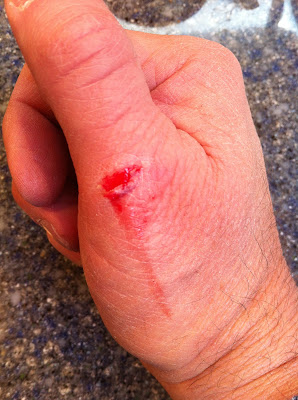 The weather is going to be crappy for the next week or so, and in any case I signed up for the spin-a-thon on April 21, so the trainer tire had to go back on. There have been a couple times where it's been an ordeal, complete with bad language, hurt feelings, and pinch flats. Last fall I figured out the secret. The tire has to be warm. Not room temperature warm, but actually warm to the touch. Linda would do horrible and unspeakable things to me if I put it in the dryer, so here's what I do. I let the heat gun blow the warm around the inside of the tire for a while, moving it every now and then so one spot doesn't get hot. Then I'll do the outside till the tire is warm to the touch. Everything is ready on the wheel end, and on it goes with no fuss, no muss, using only my hands. No tire irons needed. You're welcome. 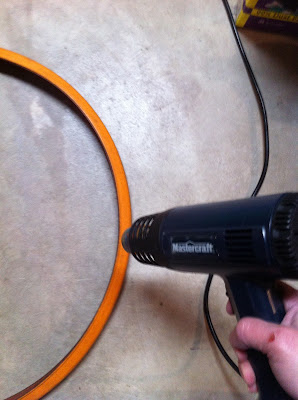 I was at the library the other day and picked up a bunch of CD's on spec. I've been in a musical mood lately, so I started with A and picked out what interested me. This blog was mostly written to a Canadian band called Black Diamond Bay that is pretty good. The last bit was to something called Binary Park that I'm not sure I like. Kind of European electro techno pop.

Anybody not get the pun in the title?