Or infamous. I've heard a lot of swearing about it.

So first the day from my perspective, with some contextual preparatory remarks. My last triathlon was the Chinook half iron in 2012. Let's just say there's been some difficulties. I'd sort of mused about doing the swim leg of a relay, and Michelle jumped all over that. She is already a strong runner, and has been working on bike, but she just learned to swim last winter, so it seemed like a good combination. Even late last year I knew I wouldn't be able to do a half this year.

Over the winter I tried to get really regular with swimming, and mostly succeeded. Going into this race, to do 1.9 K, I was thinking no more than 40 minutes, and that 35 to 37 minutes was what I expected. I had faint but plausible hopes of going under 35 minutes.

We were not out to set any records, or even aim for the podium. This was to give Michelle a taste of a big race and to see how it feels to race pace 90K, then race pace a half marathon.

We got there and through body marking in good time. Michelle got stuff set up in our transition area, but that was much easier than usual because she could wear all her bike stuff as she waited for me. 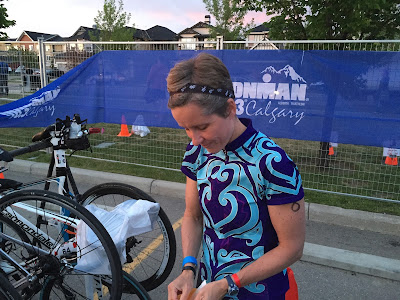 In T1 we saw our buddy Leana with her usual big smile. She had an awesome day! 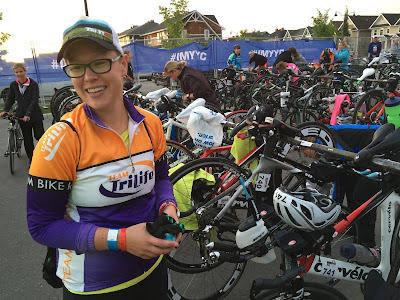 Waiting on the beach. It's a nice beach. 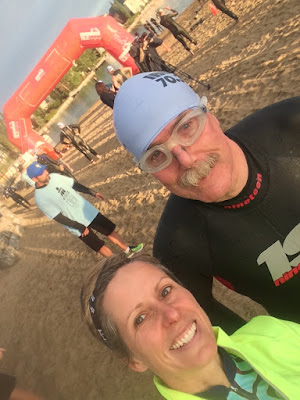 The lake is sort of heart shaped. 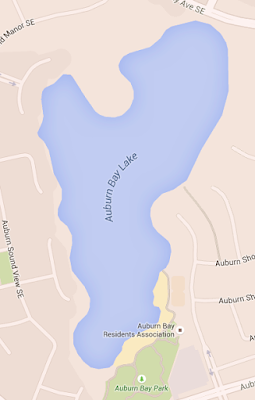 We were to swim from the south to the lobe in the top left, around the little headland, into the right hand lob, back along the right side of the lake. The map at the athlete briefing had a bit of dog leg out to the middle of the lake, then back to the beach at the bottom right of the lake. I don't know how many people saw it.

I got a very good start with the wave just after the female pros. Straight down the lake was fine, getting settled in, but not really finding my groove. There were two distinct cycles of washing machine along the way as people converged on me, and I got kicked in the side pretty good once. I went through a mental checklist, thinking about the various things that make for a fast swim. It didn't seem to make any difference.

Around the big orange buoy, around the headland. Into the sun and I couldn't see squat. I followed the splashes and they got me to another orange buoy. Around that and I could start to hear people talking, wondering where they were going. I followed splashes that led towards a big white pyramidal buoy.

And then we floundered. Supposedly there was some blue buoys, but I never saw any of them. Straight ahead and off to the right was a yellow buoy.  I knew that was the dogleg so I headed for it. Along the say, I heard a paddle boarder telling people to go to the far yellow buoy. I could barely see it. I looked to be almost down at the other end of the lake. I turned right and headed towards it, with hardly anyone around me. A few of us went around that buoy and headed back. Now I was feeling the swim groove.

Here's what Strava thinks happened. Picture a lot of people in the middle of the mess yelling at each, and you'll have a good idea of what was happening. Some of the people looped around the north most buoy. Some stopped and turned around figuring that couldn't possibly be the course. When we got back to the middle yellow buoy, we were suddenly in lots of traffic again. Lots. I suspect that many people unintentionally cut the course in a major way, since that's what it was last year. I'd heard people collided with each other, which really ought not to happen.

I coasted into the really shallow water till it was about knee deep, then thrashed around standing up. Across the timing mat, 43 minutes and change. I didn't know that till quite a bit later. The little bit of trot and lots of brisk walk into T1 was an exercise in focus. There were lots of curbs to trip over and I didn't want to.  Michelle stripped off the chip and headed out.

As I walked into the relay area, I thought there were 5 to 10 bikes gone out of the 50 on the rack and Michelle said not many relay swimmers had come in, so I was pleased. The results later said I was the 18th relay swimmer out of the water, but not that many bikes were gone, and there was nobody else exchanging chip with us. Maybe they all went for a coffee to recover, I don't know. I sure don't pass anyone between the swim exit and the bike. 18 out of 50 is about one third, which is about the slowest I've been in a triathlon swim. I'll be the first to say I wasn't feeling fast in the water, but there is no way I swam only 1.9 K. On Facebook I saw some comments that indicated the course was 2.1 to 2.4 K. I can believe that latter number.

It was nice to take my time taking off my wetsuit. Both my calves were feeling very pre-crampy. I'm sure glad I didn't have to get on a bike and ride anywhere. I zoomed up to T2, and strolled around, chatting with a few people I knew.

The rest of the day belongs to Michelle, and she's promised to send some text for a guest blog. As another teaser, here's how she felt about finishing. 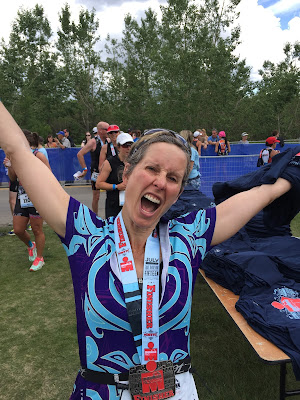 The finisher medal is actually a belt buckle, and it's huge. Here, left to right is my belt buckle medal from the very first Calgary 70.3, Ironman Canada, the half marathon medal which had been the biggest one till this weekend. And now this. I can't wait to get some leather on it and wear it to the office. I feel surprisingly honest about wearing it, the same as the many other people that did the whole race. We ran down the finish line together feeling great! Can't wait to see those photos. 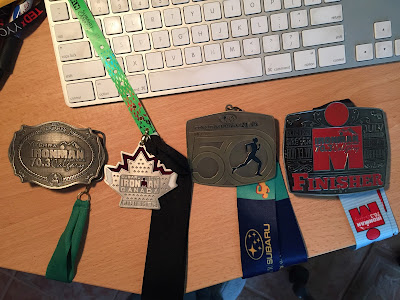 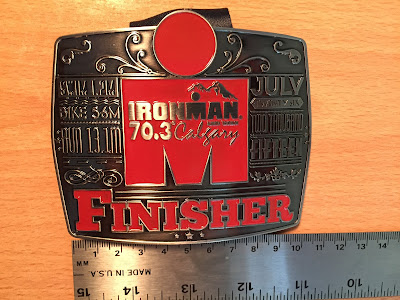