Riding the road to Nepal 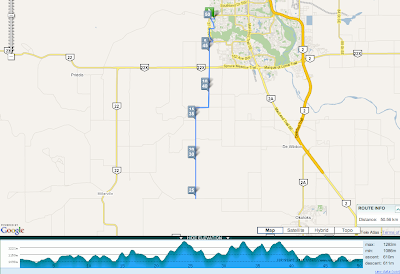 It was supposed to be nice, but it started off overcast and cold. By noon or so it had warmed up a bit, so I decided to dress and leave. I wore a bit more this time. Two pair of socks, my tights, a fleece jacket between my shirt and wind jacket. That was just about right. The ride south was into the wind the entire time. Mostly it affected going downhill, and the only consolation was that it would help me up them on the way home. But there were a few uphills where I had the hill and the wind. That's no fun. You spend forever going up, and the down takes mere seconds.

There are some serious hills on this route. Serious. Hills. I didn't time myself or do anything fancy. I didn't want to know. I just wanted to get out there and get back under my own steam. This was harder by far than any spin workout. There were several times where I looked up to see lots of hill left and me in the granniest gear. There's no choice but to dig in and keep going, and going and going. But I didn't visit the retaste zone, and I'm surprised my heart rate was as low as it was. My calves sent several stiff Notes of Complaint, but kept going. Serious snack after getting back, two bananas with alternating smears of peanut butter or Nutella, with a glass of milk. Once I finish my shower, I get onto the massage table.

Firsts:
Longest ride by far to date.
Fastest I've ever gone on a bike. Estela was rock solid and willing to go faster. Turns out about 100 rpm in the top gear is about 60 Kmh.
First time riding this route.
First time trying Perpetuem. Not bad, but the flavour doesn't do anything for me at all. I ended up usually having some of it, then having some water. I think I'll try something else rather than buying a big jar of it.