The less said about that, the better

After the nice swim, let's just skip over Tuesday entirely, shall we, and stretch the skip  till the lovely snooze with the Curtis soundtrack Wednesday afternoon. You don't want to know.

Then Linda was trying a new recipe. It tasted really good, but there are improvements to be made, she says. I managed to catch a moment of the cauliflower pizza prep. Rather than a wheat based crust, it used riced cauliflower. That's the piece that needs some work. 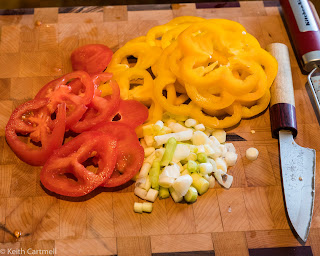 While that was in progress I was out doing a little bit more ice chipping after the snooze, trying to get as much water off the street before it snows more.

Yes, more. They are forecasting 10 to 15 cm of snow today. All the snow so far has been light and fluffy, but this is probably going to be wet and heavy. Good thing I don't have any outside plans for tomorrow. Well, except shoveling. Lots of that.

Here's what it looks like Wednesday evening after a beautiful sunny day. 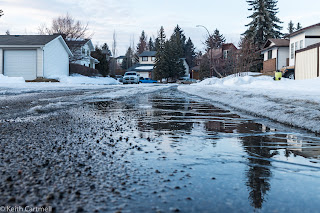 The alleys are going to be ugly. That's all soft and slushy, and I sure hope it gets cold before it snows. 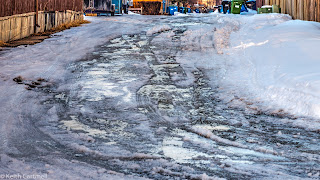 By contrast, this ice is hard as steel. I could see some subtle yellowish highlights in the ice from the setting sun, but they don't really show up quite the same here. 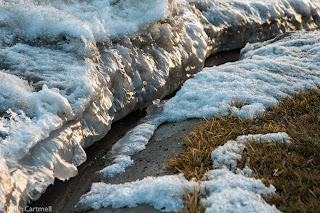 As of Thursday morning, there is a light fog, ominous clouds, and it's just beginning to snow. Here we go again.

Anybody have any experience with big digital frames? One of my buddies wants to get a print of the white peony, (yay!) and I was thinking of getting one done as well. Linda has a small digital frame, maybe 10" diagonally she kept on her desk at work. We got to thinking a big one might be a nice way to display my good photos. At some point you get into TV territory, and I don't much care what it's called, as long as it can cycle through photos. Suggestions?