For the Celina fans out there

In furry person, Celina is quite a pretty cat. Very elegant and well spoken. Extremely well spoken on many different subjects, as anyone who has met her knows. Photos, however, don't seem to do her justice. The camera doesn't love her the way it loves Curtis. I'm not sure why. She's actually a difficult subject, always turning her head, or giving me the squinty-eyed look when I have the camera in hand.

Often when she snoozes her head is tucked down into her tail, or into the lap she's in, which doesn't make for a good photo. I don't think I've ever seen her snooze on her back like Curtis does. She typically doesn't stroll from place to place, she darts, and it gets her nearly stepped on sometimes.

Lately she's been taking to eating her food really slowly. Curtis bolts his food then comes along to push her away to finish hers. She's such a tiny kitty we don't want to see her miss any meals, so we separate them, or stand there and watch. She will slowly crunch away, looking at hime between bites. Poor Curtis. A few times I've just let them do their thing. I figure if she's hungry she'll eat faster.

Here's 3 recent photos that are a bit better than average for her. 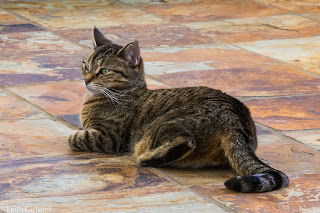 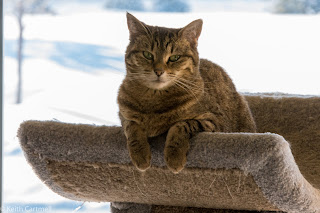 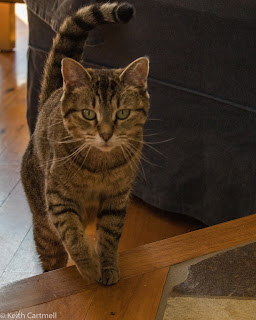