The annual struggle happened on Saturday. The one that has filled me with dread and rage in years past. Even with the trick, it was still a struggle, and I was almost certain I was going to pinch flat. But no! That was a major yay. It took a bit of doing to get the trainer calibration dialed in. I was getting tired of the on, spin, relax, off, tweak the nut (down Glaven if you're still reading), repeat.

It was kind of nice to get back on Estela and do easy spin for half an hour. Then some stretching and serious rolling.

Throughout the day I pounded out 2003 words, in between watching for the awesome SUAR to appear on the internet camera during her very first Ironman. I'm pretty sure I saw her leaving T2. I was really enjoying writing and watching the snow fall. We had been invited out to dinner with some dear friends of ours to a nice Italian restaurant not far from their place. Saturdays they have a fixed menu, and all I have to say is Osso Buco is very good. At one point I slipped off to the washroom for the obvious reason, to check the athlete tracker. Congrats to Beth for finishing just under 13 hours. I had sent a secret message to her son to take lots of photos of her sweaty and salty crusted finish line sprint. Can't wait to see her blog about it.

It snowed a lot. Still, Cori braved the roads and showed up here, with Cobb Bakery treats. We kind of slithered down to the park. Part of the path is plowed in the winter. That didn't have much snow on it, just frozen slush and some ice. Much of what we were on isn't ploughed so there were several inches of snow holding a variety of footprints.

We ran easy over to the hill of death to decide if we wanted to go up or not. We did, then ran along the south side of the park. It's so beautiful with the trees all covered in snow. We only saw a few people. It wasn't particularly cold, though it was windy in a few spots. Here's Cori with the hill of death decision. 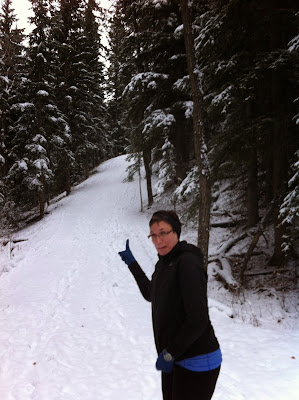 We were not in a rush at all. It was her first run in several weeks, and I've been taking easy to let my back feel better. Everything was fine, with only some slight twinges when I stepped on a big ball of slush. 7 K, an hour and 6 minutes. The first big spike is the hill, and the second is the trail run to avoid the washout. 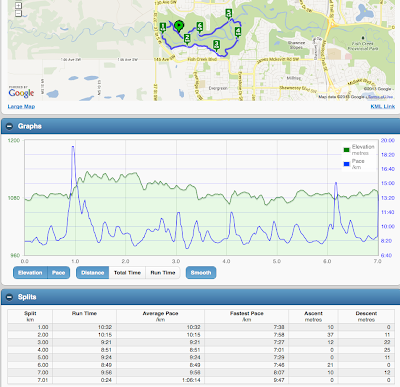 Here's a couple others from today. We fed him the last of his antibiotic pills, so he was feeling a little subdued today. 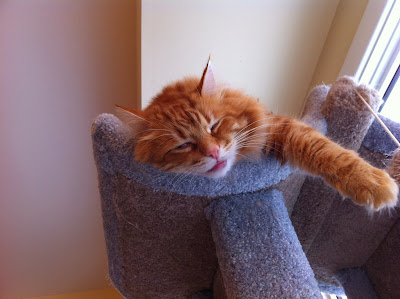 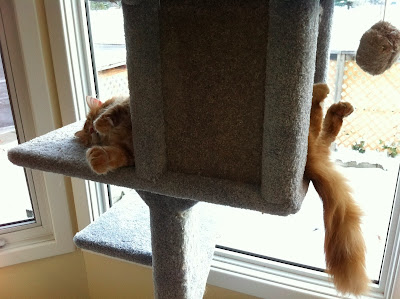 Lastly, there are animal photographers that would be happy to get a shot this good of a cat. When Curtis needs a passport or a LinkedIn profile, this is the one we'll use. Thanks Cori! 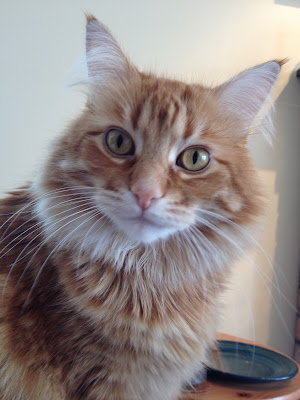 I'm up to 2731 words today, having got an early start. I'll be back on in a few minutes. Now I know where that next scene is going. I'd love to hit 5K words for today, but we'll see.

#runwrimorun slogan of the day: "Barf it out, edit in December."