Yes I'm very pleased about pounding out my 60 K words for NaNoWriMo. (I was 4 short of that, so sue me.) I'd never done anything like this and found it very liberating. It was a bit daunting at first, even though my first "novel" that I've been working on, off and on, for years now, has more than 120 K words. Fitting it in with everything else was the hard part. But I had a good start with Cori coming over one weekend for a run and writing session, and lots of encouragement. Linda is in the process of reading it now, essentially as it was uploaded to NaNo. I've made some tweaks here and there, but mostly I'm planning some layers and background detail.

Those that have been reading my blog for a while know that I like to rant every now and then. That I tee off on holidays is no surprise. You can search back through my blogs to find some of them, it's not that hard.

This weekend I was reading about how retailers are building in the discounts into the price right from the start, and are essentially colluding to over-charge consumers when the product first comes to market. Duh! Is anyone surprised by this?

Once again I laugh at people heading out to "get a deal" on what is mostly cheap shit made by slave labour in China, to add to all the other cheap shit in their overstuffed homes. I didn't buy anything yesterday. Or the day before, and stand a pretty good chance of getting through today. Hmmm, when did I last fill up the car?

Lately I've been reading about some workers trying to pressure Walmart into increasing worker wages. Good luck with that. I mean that sincerely. Walmart is a monolithic corporation that exists only to cut the costs out of the supply chain and maximize profits to the shareholders. Nothing else. This is what corporations do, people.

The only check on them, the only one, is for shoppers to shop elsewhere, and tell them you're doing it for ethical reasons. Except that most shoppers in those stores have no ethics. Or morals. Or shame, for that matter, as the people of Walmart photos make clear. Therefore Walmart will continue to vacuum money out of your community and send as little of it to China and the supply chain as possible, and keep as much for themselves as possible.

One used to read about people protesting a Walmart coming to town. They rightly saw the danger to the locally run establishments. But what happened? Most people went and shopped at the store. The lure of cheap shit was too strong. If few enough people shopped in a store, to the point it was unprofitable to run, Walmart would close it pretty quick.

Here's a photo of what we have to put up with this season. This wasn't in a shopping mall, it's where I park these days for work. I was seriously thinking I might have to crawl in the passenger side, but just made it. Bastard. 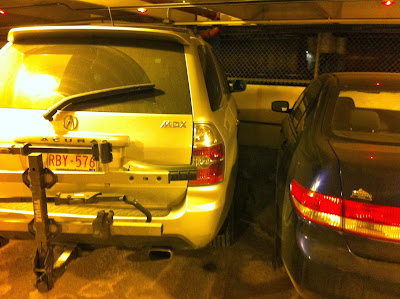 And in fairness to Costco, I have to admit I love the size of their parking lot stalls. Lots of room there.

While I'm on about it, I have to talk about traffic lately. Holy clogged, Batman! It's been brutal getting around town this week. 14th Street essentially between Glenmore and Southland is a parking lot that overflows onto Elbow. They installed a new double left off 14th to Heritage, and a triple left (a TRIPLE left, just think on that) from 90th to 14th, but it's not opened up yet. Meanwhile traffic is a gong show. No wonder people are shopping from home.

We got a book the other day, nothing we had ordered. A few emails back and forth, and they refunded Linda's money, and said we could keep the book. The next day, the ordered book showed up. I don't know how that will get sorted out.

It turns out we missed a thing when we were doing house renovations, or getting the front door installed. We should have installed a secure box of some kind where delivery people could put things. Right now stuff just gets left on our step. For a few pounds of coffee, or a book, that's no big deal. For the laptop, obviously I made other arrangements. I was listening to something on the radio the other day, and the commenter was essentially calling anyone shopping in the stores an idiot. Why, he said, would anyone go to a store if they didn't have to?

Well, some of us like to touch the fabric first. Some of us like to keep people in our community working. Personally, I'd rather deal with a smiling human (admittedly in short supply this season) than a computer. I always find it just a bit stressful filling out the computer forms, especially when they are trying some new customer interface. I'm still pissed I lost bulkhead seats on the flight to UK because I couldn't figure out the seat selector tool in time.

Yes, I've heard Christmas music already. Sigh. I think it should be a rule, no Christmas before December 1. Nothing! A whole frigging month is more than enough for a one day event. People make too much of it. Travel. Food. Gifts for everybody. The tree, and everything just perfect or it's spoiled.

Buying gifts for Christmas completely stresses me out. It isn't spending the money, as such. It's figuring out what to get, that they don't already have, and that they would like, and find useful or maybe pretty, but that they somehow hadn't yet got themselves for some reason. For me that's an impossibly small window.

I accept the reverse of it, that I'm a difficult buy, because there isn't much I want. When I need it, or decide I want it, then I'll go out and buy it. I don't sit around wondering if it will be on sale next week. I don't worry about it being 1% cheaper somewhere else. I hate fussing with coupons, or promo codes, or liking things. My time is worth something to me, and I'd far rather be at home with a cat in my lap than out fighting traffic to save a tiny fraction of my hourly wage. I know that in a week or two it will be cheaper, maybe quicker if it's electronics. I don't care. Once I decide it's time to buy something, I'll take my pick of the products on offer, and make the choice that seems best to me. Paid. Done. Out of there and onto wherever is next.

Which today is going to be a run, while it's nice. We get major winter coming sometimes late Sunday or early Monday. Friday morning there was a nice swim, 45 minutes and getting sloppy towards the end.

Now, to get some coffee brewed, and enjoy the bakery treats Linda brought home yesterday afternoon.