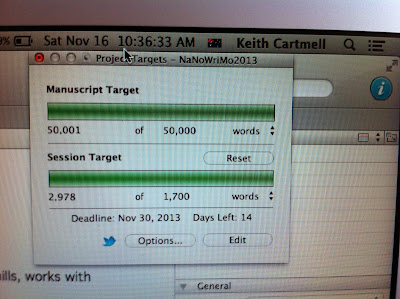 I kept going though. There are bits of the story to fill in. I ended up at just over 51K words today. My plan is to continue chugging away pounding out the words. Then I'll take a snapshot of that and submit it to NaNoWriMo to verify the word count.

From my experience, the hard part starts. I'll take a copy of it and start editing. For some people producing the initial words is the hard part; but twice now that's not the case with me. There's a hard decision to make fairly early, in that the Plant Novel I've been working on is both a prequel and a sequel. It's hard to explain. Ronnie is a secondary character in that novel, and two of the primary characters show up as minor characters in this one. Can't keep a good character down. My initial thought is to leave this as it is, and see what pro editorial comment is.

I need to go through and build in some description. The two attempts at bridging scenes turned into full scenes in their own right. Almost of this is written in time order, where the Plant Novel was all over the place. The Sweet Elixer (my draft title) is in chronological order over about a decade. I'd initially thought it would be over about 30 years. I'll have to think about that.

One of the difficulties has been the cats. Normally if I'm sitting, one or both of them is in my lap. That's a lot more difficult when I'm trying to type on a laptop. Here's Curtis's opinion of my laptop. 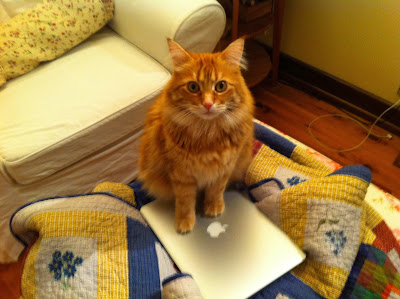 Friday morning I was in the pool for a very nice swim. 1K, 19 minutes or so, plus some kick and pull 45 minutes altogether.  The water feel is coming back in a big way. I didn't feel the least tired at the end of it.

After I hit the 50 K mark I stopped writing and headed downstairs for a spin session. It's snowing pretty hard out there so I didn't feel like a run. The spin went surprisingly well. There's still a bit of stiffness in my low back but it's very gradually getting more mobile.

We've had a wonderful peaceful day inside. Linda has been cooking up a storm. We had roast chicken legs with dressing and veggies. A quiche of the house is made along with cinnamon pinwheels. Some duck legs are slowly baking in a sauce for serving on wild rice later. The wine was an Amarone, the little sweet one. I didn't much like it at first, but it's much better now.

Tomorrow is Ironman Arizona. My buddy David Turner is entered. It's his first Ironman. I'll be cheering him on and following throughout the day. What's important about David is that when I met him while working at Skystone, we were both big people. Very big. I started trimming down. A bit later he started following suit, and it's fair to say he had further to go. He's better prepared for his Ironman than I was, in that he has done all the distances. I'd never done an marathon. I'm confident he's going to have an amazing day. If you get some time, cheer him on, bib 2624. Just to confuse things, there's a Dave Turner, same age group. I think there some other people from Calgary entered as well, but the athlete tracker is being pissy.