At last! I'm a bit faster, but not especially so, but that's not what's important. My last two tries at this race were pretty horrible days. The first one was my very first triathlon, so I expected it to hurt, and was not disappointed. Still I was, and am, pleased about the result. Finishing. That is what was important to me, and I've always been grateful for Kelly encouraging me along.

Then 2009 was a horror show. I don't want to talk about it. My goal for today was to have a nice day. Faster was nice, but enjoying the race was more important. My training has been a bit erratic so I wasn't expecting a huge improvement.

The centre of the lake was cold. Very cold. Linda says one guy came back to the beach in a boat, no idea why. I just relaxed and swam along. Turns out I was a bit wide on the first lap, and the second was a bit faster. Passed several people. Got kicked in the belly once. Who does breast stroke just before the first buoy? I felt a few twinges in both calves and resolved to be careful standing up, but they didn't bother me.

I took my time in transition by not trying to run to my bike, and was out on the bike exactly when I thought I would be. It was cloudy and a cool, with tiny little spats of rain. I felt strong on the bike right from the beginning. Most races (who am I kidding, ALL races) I got passed a lot early on, and the passers zoom out of sight and over the horizon very quickly. Almost everybody that did pass slowly pulled away. There was a fairly steady cross wind from the south. It was cold. My left hand was numb most of the ride. There's a trick some people can do on the bike, and about 10 K into the ride the need became urgent. I'm now one of the people that can, though it takes a bit of doing.

Turnaround on this road is always nice, and it was this time. I got a bit warmer for a while, then got back into the wind again. A few more people slowly passed me on the way back. There was one moment of panic where a frustrated driver blew past a bunch of other cars, and a cop in the intersection, while driving on the shoulder, and nearly hit me. He was maybe 6 feet behind me. My heart went pitter patter for a little while after that one. I got off the bike in 3:30 or so, almost exactly where I thought I'd be with my current fitness level. My times are a bit messed up there, my bike time is shorter, and the transition a bit longer. I'm really happy with my ride.

And then the run. I struggle with the run. As some of you have surmised, I am not a natural runner. Today's "run" was a very interesting experience. As soon as I started I knew my legs didn't mind running. The problem was my heart rate and lungs. The sun had come out and it was pretty warm. After about a Km of hoping things would settle down I realized I was heading for a problem, and changed plans. I walked briskly to get things back under control, keeping track of how I felt. Then I ran again. It took about 5 K to settle into where I was running more than walking. My legs wanted to run. My GI system was also working hard. I've never passed so much gas during a race. The more I passed the better I felt.

It cooled down at the start of loop 2, and I felt pretty good running for quite a ways, then the sun came out again. I nibbled pretzels. Then down in the great plain of Fish Creek I realized the last run hadn't lasted very long, and I was breathing really hard while just walking. My legs were getting tired. They didn't like the slow run. I walked much of the last 4 K. I wanted to run into the finish line, but my calves started cramping so I had to walk a bit. Still, I think I was running for the finish picture.

Even though I was walking lots, I was still feeling good. It wasn't a death march by any means. I was enjoying the scenery, both the kinds that live in the park, and the kind that just visits. There wasn't much company during the last lap but I didn't mind. I chugged along, knowing it was the smart thing to do. 7:17:xx finish time. They were packing things up, so I might be the last finisher. So what?

All the protein food was gone but Linda scrounged me some rice stuff that was pretty good. I'm going to have to either do shorter races, or get faster if I want food at the finish line. Here's a pic of me wearing the finisher gear. No medal this time! 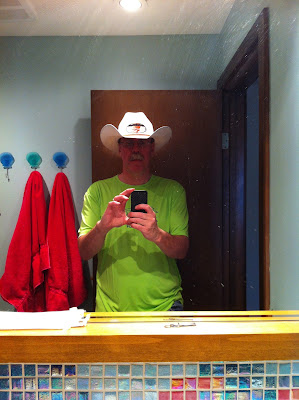 Yes a white cowboy hat and a lime green finisher shirt. I will have to wear it if I ever do a race in San Diego. I will fit in with a particular running herd. For years I didn't have a cowboy hat, even though I live in Calgary. Last year I broke down and bought one. Now I have two.

Interesting fact of the day. Even after drinking about 3 litres of fluid throughout the day, I lost 2.5 pounds on the day.

What follows is technical stuff of interest to very few people. But then, what do I know? Julie loves it when I talk numbers. She has a guilty fascination or something. I have many engineer readers, and numbers often fascinate them. There are times I think triathlon coaches can't help but look at results numbers and think about what needs to be done in terms of plan.
Chinook has some slightly odd distances for a half.
2K swim, 2 laps in a lake.
96 K bike, pure out and back, quite hilly by most people's standards.
21.1 K run, 2 laps in Fish Creek.

So here goes a comparison to the last times I did this. These are my watch times, rounded slightly.


Swim was intentionally slower, bike was slightly faster, and the run slightly faster. My transitions are getting better too. I can't remember what I used to be doing.


I'm not in the shape I'd like to be. Recovering from IMC 2010 took a long time, and letting my knee recover took most of 2011. Plus, I was feeling allergic to a plan. I'm trying to be better about work life balance, and I didn't want to be doing a workout because it was on the plan, if I wasn't feeling up for it. I blew off a few where I was thinking I'd go if it was on the plan, but I'd rather do something else. Plus the weather has been crap for outdoor rides.


I wanted to find out where I'd be if I followed my own schedule, and now I know. A little bit faster, mainly because of a better cardio base and more experience. Feeling much MUCH better after the race, even though it's a bit faster.


What are my learnings here?:

I'm signed up for the 70.3 in 6 weeks. That isn't enough time to change my base, but I can work on the run, and especially brick runs. Then after that race, I might sit down with a coach. I don't want a weekly plan, I'm pretty sure of that. I'd be looking more for guidelines about volume, and kinds of work to build the volume.