13 accordions and other stuff including a mini rant

Lots of stuff on the go, but no bullet points. I tweaked the comments section so there is different stuff there, and some more options. I'm not even fully sure of what all is there, but I'm hoping people leave comments, and comments on comments, and try out the discussion section if there's something you'd like to discuss. And I'm sorry Leana, your comment got eaten. I'll try to fix it.

It's just after the mandatory pre-race meeting, and I've got a bit of a bone to pick. Keep in mind that I think Mike Bock does a great job of organizing the various Chinook races. There is an amazing amount of work that goes into putting on a race like this, and I'm glad he does it and not me. It's all round a good race experience.

My bone is the pre race briefing, going over the rules and such. That information can all be made available on the race website. Much of it doesn't change from year to year. If you're going to go to the trouble of having a projector and laptop there, use it. There were 3 slides, with at least another 2 that were needed and not available. It would be a great idea to have it showing race photos from previous years as a slide show while other activities were happening.

If it's going to be a mandatory meeting, then by golly make it mandatory. Stamp the hand of people as they leave, and they can't race the next day without that stamp. The briefing is to tell us stuff. Tell us. That. Stuff. Nothing else. You aren't there to amuse us.

If the information is on the web, then tell people they only have to come to the race meeting if they have questions or want the meal. Asking a question that is already answered by on line materials is a 2 minute penalty. Before you get into transition in the morning, each racer is asked a question covered by that material. Failure to answer correctly is another 2 minute penalty and on the spot humiliation by bullhorn.

But all that is just me. Everybody else loved it, and was hanging on every word. There was total silence in the room while he was talking. Not. Grrrr. At least he didn't do a powerpoint presentation. Thank you for small mercies and all. Plus it was fun meeting up with one Deb, but I didn't see the other Deb I was expecting.

I'm all packed for the race. I think. The wine is clear and ready to bottle. Sunday for sure, if I'm up to it after the race.

Celina and Curtis continue to settle in well. They are actually licking each other a little bit, and settle into the same lap, at least for a while. Curtis is still a bit spooked by outside noises.

I've taken some photos during my lunch stroll, but haven't had time to post them.

Here's another view of a famous Calgary building. Yes, it's right side up. 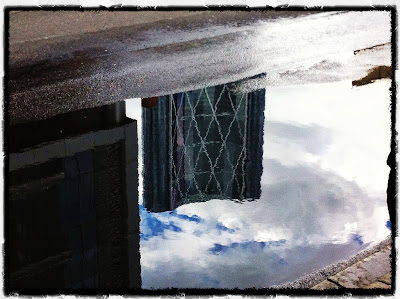 Here's the inside of the pedestrian mall from the +45 level. The new Devonian gardens will be down at the far end. 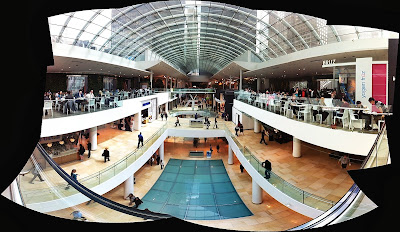 The oldest steps in Calgary are being refurbished. This is the front door to the Palliser Hotel. I think putting a polished marble beside stairs, where it will get wet, isn't the smartest idea in the world. 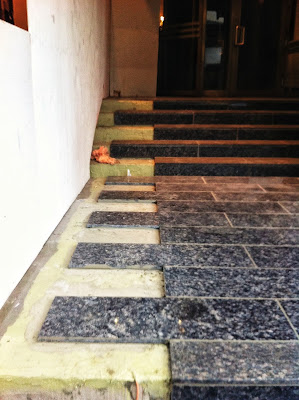 Until a few days ago, I suspect that I could have counted all the accordions I had ever seen in my life on the fingers of one hand, two at most. Here is an ensemble with 13 of them. It was hard to count so I might have been off by a few. 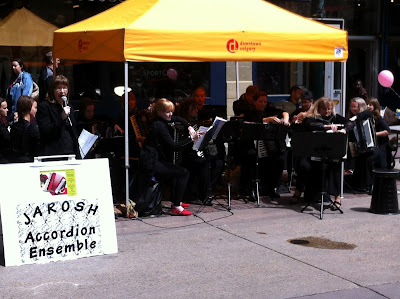