Trying to keep your devices charged in a foreign country?

First of all you have to start when at home, reading the fine print on the back of all your electrical devices. You know, that rough surface where you have to hold it in the light just so, in the sweet spot of your glasses so you can squint and make out the almost microscopic bumps. Some of them say 110-220 V input. Others say only 110V. Many other countries around the world run on 220 V. Plugging a 110 V appliance into 220V via an adapter is not a good idea.

There are two thingies (hi Julie) you can get. One is an adapter, the other is a converter. The first has prongs that let you plug your device charger into one side, and the other side goes into the wall. Power flows to your device and life is good. The converter also connects your device to the wall, but reduces the power from 220V to 110. Adapters are cheaper than regulators.

As it happens all our electronics can be plugged into 220V except for our tooth brushes. The first trip we took our manual toothbrushes, and for this last trip, Linda found battery powered tooth brushes. Note they come with cheap batteries. The first barely lasted a week, and the regular ones from the supermarket were still going strong 3 weeks later.

So just at the bottom of the photo is a cylindrical adapter, and the yellow extension cord plugs in. The other end of the cord has my phone, Linda's phone, and my laptop plugged in. Periodically I plug in the camera battery charger. The orange hard drive gets plugged into the laptop when I'm working on photos. Putting some thought into managing the cord tangle so you don't trip over anything is a good idea. This is from the swanky Dunedin loft. 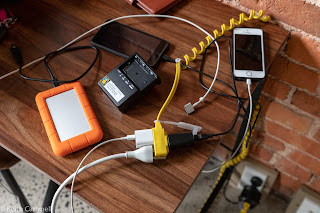 The trick is to find an accessible plug in your accommodation which explains the extension cord. One place last year had hardly any, but all the places this year were pretty good. It does make for a bit of a rat's nest at time, but needs must and all.

Other electronic stuff to take care of is the SIM card from your phone. Linda's phone has two slots, so after a bit of playing around we got it to work. Mine has only one, so when the Vodafone SIM went in, mine went into the case that carries my camera SD cards. You really don't want to lose your SIM card.

Of them all, keeping my iPhone charged was the most critical. That USB cord followed me to the car, and the phone was usually plugged in. The battery is getting flakey. Let me just say that some car USB ports are not optimally placed and leave it there. We relied on Siri giving us directions, and mostly it worked out pretty well. There was another instance of Siri not knowing about a road off a roundabout, and she seemed to have a fixation on a particular way to get in and out of a particular New World supermarket parking lot that made no sense at all.

Some cars were painless to plug in and get directions with the music silenced. Others, I don't know why, but it was impossible to get the directions through the car speakers without also getting music. We reverted to leaving the phone unplugged to get directions when necessary, but during the "continue straight for 28 Km" portions we plugged it back in. As an aside, that particular 28 Km stretch took about 30 minutes, and wasn't even particularly hairy by NZ standards.

So how's the editing going, you ask. Chugging along. My edited folder has 544 photos from the trip that are not yet blogged. I've been working through the photo library methodically, day by day. I'm up to March 5, and it has 41 photos to look at. I've temporarily skipped past the two batches of flowers, and the night shoot. Then there's keywording and reviewing star ratings so I can find things again. Some of the beach and driftwood shots are candidates for printing, or display to a wider audience on my photoblog.

I still have no idea how I'm going to deal with all these edited photos. For now I'm thinking the photos will revert to a mix of current photos, vacation photos where it seems like fun, sand patterns when I find them, and the ongoing driftwood feature. For a while I was thinking about doing a pareidolia blog, but then I realized that a great many of the driftwood chunks had eyes, or faces, or animal shapes. There were faces in some of the rock formations. So they'll show up along the way, and you can tell me if you see a face or an animal or not.

Here's a straight up animal, a Takahe. You might remember a close up of the feathers; they look like fabric. 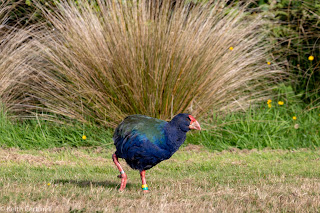 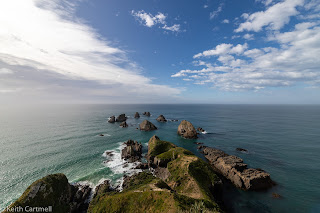 To keep you on your toes, here's a rock pattern instead of a sand pattern 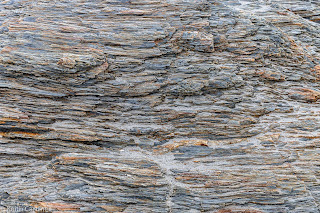 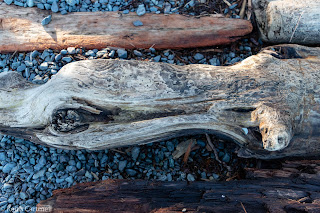