Reflections on a so-called career, part 4

What office you have, or the view from it isn't important. Your office chair is. Your ass is in it for a long time. Get a good one, claim ergonomic issues if you can. Set it up as best you can. Get one of those standing desks if they let you, and stand periodically. If you move offices, make double sure your chair is moved with you. If possible, move it into the office of a buddy that isn't moving, and get it the day after.

You won't get much choice about monitors, but ask. For my work I wanted lots of screen space. Two monitors was the minimum, and for years I had three. One for the SQL tool, one for xl, and one for the database front end. It's an effort every time you switch what you're thinking about. The harder it is to switch, the more effort and the more likely you'll screw something up. Trying to find the xl screen you want can kill your thought processes.

Try to minimize interruptions when you are deep into it. My colleagues soon learned that if I was scribbling little squares and arrows on a whiteboard, the only acceptable reason for bothering me was that the building was on fire. When your brain is full of some task, holding all sorts of stuff in particular relationships, an interruption is fatal. A 30 second question can cost you 30 minutes to put it all back again. Work out a 'don't bug me' system with your colleagues, and respect theirs.

I never knew what I wanted to be when I grew up. Many of my jobs didn't exist when I was a kid. It is completely reasonable to assume that the same is still true today, that what people will do for pay in the future isn't a thing now. Unless you're passionate about a thing, go for a general education, and learn how to learn. Pick up some specific salable skills that you can explain to a recruiter in an elevator pitch, or slightly longer, and learn how to do that. My work was often the complex intersection between technical data integrity analysis, project planning, software training, and process mapping, and that's difficult to explain to someone who doesn't actually do that work.

Learn to type with all your fingers, the faster the better. I've often said that the most valuable thing I learned in school was how to type, and I've always been grateful my mom talked me into it. Even if her reasoning that caught my attention was 'you'll meet lots of girls', but she knew that computers were a coming thing. It hurts my soul how some people type. The faster you can type, the faster you'll dispose of emails and reports.

Learn how to think logically and remove emotion from the issue. (hint, it's really hard.) Learn how to figure out what order things need to happen in.  Focus on what's important for you and the organization, which might be subtly different things. What your boss thinks is important might be something else entirely, and needs careful management. There's been several times I was kept, and my boss let go, which is a weird thing.

It used to be that you had little control over your pay. It's probably true if you are in a union shop. But negotiations about pay are critically important to your working life. This does not always mean getting the top dollar. Several times I've traded money for time. Once to get an extra week of vacation earlier than technically allowed, and once to get off shift work.

There is a continuum of pay for the work you can do for an organization. At the top is the very most they would pay assuming they need your specific and particular skills in a really tight job market and you're buddies with the management, and blah blah blah. Then there is the least they would pay, which is probably lower than you would like to think about. You never want to be that top end guy, unless there are pretty specific circumstances, and you have an exit strategy. Why? Because if things change, and they will, you are at the top of the let go list, especially if you pushed really hard in negotiations. Consider the company might beat you to your exit strategy.

You want to be in the ball park for your skills. If you have a good relationship with your recruiter, they are usually willing to help you find that ball park. After all, the more you get paid, they more they get. Most of the time I was willing to be easy about the starting rate, with the idea we would re-evaluate in a reasonable period. Several times I got paid more than my top asking rate, because they wanted me and my skills. When you're talking money, it's gold to be able to point to specific things you've done, how your contributions add value. That's better than talk any day. The usual rule is that the first one to mention a specific figure comes out on the short end. It's a bit of a dance, and the better you learn to do it, the better off you'll be.

If you've read some of my other essays about money, you'll know I talk about saving and investing money. Many people have a nose for how desperate you are in any set of negotiations, and especially so for job related negotiations. When you are the desperate one, it's hard to come out even, let alone on top.

Now I'll tell you a real secret. The best way to avoid being the desperate one is not your education, not your specific work skills, not your position, not that you're blowing the boss, not how long you've been there.

It's nothing to do with work at all. It's how much money you have. How long can you do without a paycheque? If that answer is a couple weeks or a month, you have a big problem. You need your employer, they know it, and they like it that way. They hint that layoffs are coming and they want you to work extra, you don't have a choice. If you're out of work, and the potential employer offers you less than what you'd like, you might not have much choice. I've been there, it's no fun at all. Fixing that is one of your first priorities  in your work life.

Now imagine you hear those winds shifting at work, but you have a year's income stashed away. You know you'll be ok regardless, so you don't listen to reorg rumours. You are on top of your networking and have reached out to a buddy's buddy for a chat about their staffing needs. If it looks good you can go in strong, knowing you don't need their specific offer. You will be relaxed. You sleep at night knowing you have choices. You will not have the taint of desperation. That adds to your desirability.

This was never the view from my office. But it would have been a quiet working place, if a little dark normally. 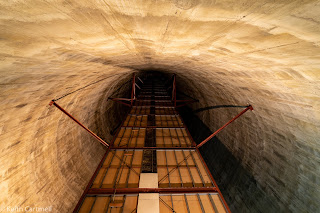 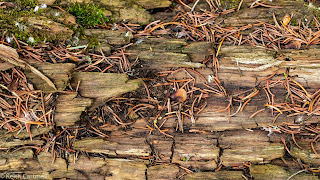