Most of you know Calgary gets chinooks. The warm wind blows, the patios open for the shorts and T shirt crowd, the snow melts like crazy, the gutters fill with water and back up the storm drains. Then a few hours or maybe a day or two later it goes away and everything freezes up again. Worse than before, because the snow and ice that didn't quite melt is all rutted.

We can usually see it coming. There is an arch of cloud over a patch of blue sky above the mountains. It can be kind of pretty. Those subject to migrane headaches start taking their pills or book off sick.

Sometimes, though, it's a weak feeble chinook, barely blowing in. This was the case yesterday. I was off on a photo gig, but saw these interesting clouds and odd light. Technically, it's a chinook, but the inversion that's been hanging over us is being stubborn. That's the clouds that appear yellowy brown, they're really white, the light is just filtered through the murk. 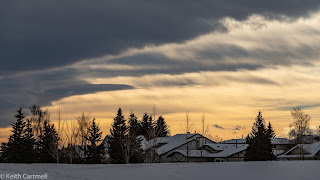 I had intended to write about a year of shooting with my new camera, and I missed that. For whatever reason I thought I'd got it over the summer, not that long ago. Turns out it was last November, and nearly 20,000 photos later. Time flies!

I still use the old T6. There was an example photo of the new lens, here's another. I'll be using it again for the macro shots, and I'll be taking it with me on some of my night photo shoots. Set it up to click away till the card fills up or the battery dies (and replace if I'm still awake) and I double the chances of catching something interesting in the sky. 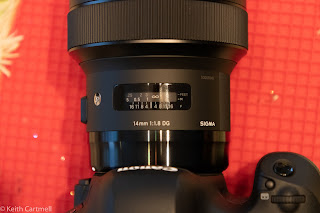 I find I now have to actually think about how to operate the T6.