A bench by day and night

You never know what you'll find when you go out for a walk with your camera. This bench, for example, was a prop for Linda in Image of the month, a year and a half ago. 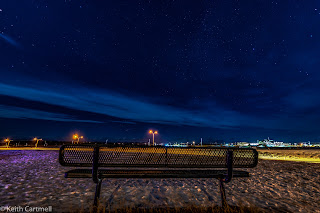 Here's the image itself, in case you don't want to click on the link to go see a bee, an ant, and a rose. 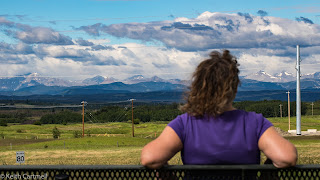 Yes, the view from that bench has changed a lot. What was green is now almost a road. A major highway, actually. Walking along the top of the berm is not as nice as an experience as it used to be unless you've got a thing about construction equipment. It doesn't look any better at night than by day.

But the interesting thing was capturing the bench, using it to block out some of the ugly yellow from the current road, and see if I could capture at least some stars. Yay me!

The time since then has passed in a blur. It seems like there's always something on the go, some next thing to do, or prepare to do. We're gradually finding the pace of life in retirement. Getting up and going to work is a slog for most people. In the latter part of my so-called career I didn't mind much because I was doing work I enjoyed.

But it's a routine, and to some extent while you're doing the routine, the routine is doing you. A certain amount of regularity is enforced by day to day work life. Now I can sleep or work on projects whenever I want. But I've been cautious about staying up late for astro photos, mainly because of my screwed up sleep patterns from shift work. I don't want to get all messed up again.

So even though night is a really interesting time to go looking for photos, I haven't done it all that much. In the summer the sky doesn't get all that dark here. In the winter it's easy to get night shots without staying up late, which is good. The trick is staying warm, and for me, keeping my hands warm and still be able to operate the camera.

The other of my evening projects is watching some movies or shows and figuring out some of the writing details. Why these scenes in this order? Why cut there? How to pace the story for commercials (most TV shows on DVD you can tell where the commercials have been chopped out). How to blend the overall story arc with the monster of the week? How to make character actions plausible, and help the watchers understand that character?

In one sense, watchers have it easier than readers, if everyone has done their job right. The scene that takes a couple seconds of screen time might take several paragraphs of actual description, and since most readers don't like big expository lumps, the words have to be spaced out. How, exactly, so it's interesting to the reader is why writers make the big bucks. (That noise you hear off screen is all the writers who are not Rowling, or King, or a very few others, gnashing their teeth.)

Lately I've been on a Coen kick. Watching the story twist and turn as people are impaled by fate or bad decisions is an education for a story teller. They have found ways to take an established film idea, and twist it into something interesting. Plus it's not just the story, it's the people in the story. How to make them interesting is the key to the whole thing working.

Yesterday I was helping a buddy do some studio work. Mainly this involved helping to set up and take down, and moving things around as necessary while he was doing camera things. During lunch afterward we were talking about out our photographic interests. I'm still coming to grips with mine, after several years of working at it, but part of it is to make the ordinary interesting.

By that I mean finding a way to make a compelling photograph from everyday elements. It's nice to find a new angle to shoot from, but for many things that's not possible. It's finding interesting light to shoot in, or a reflection, or much more detail, or something happening that adds to that element.