What happens under bridges

Most of us never think about bridges, other than crossing them on the way to where ever we're going. Almost nobody thinks about the underside of them, but sometimes they make for interesting photos.

This is one of the older bridges in Calgary, and the lowest. It's only 2.0 m clearance (6'6"). There are several signs about the lack of overhead, and yet there are still mishaps. On the day I took this, a tall cube van was doing an 11 point turn on one side of it, while drivers going either way waited patiently. That's better than the alternative for all involved. The driver had the grace to give the other drivers an embarrassed wave when he finished. Several people have tried to drive bigger vehicles under there and it worked out about like you'd expect.

There's a famous bridge in Durham county, North Carolina. It's informally called the can opener. Google 11foot8 and prepare to be amused. Thats 3.56 m, so I guess it's just high enough that people think their vehicle will fit. I wonder how many drivers have been fired over the years.

The graffiti is what caught my eye. It's actually fairly far from the path, and the river is lower than the path. I'm just guessing that some kid either scrambled out on the girders and painted with one hand, or they somehow used a ladder. 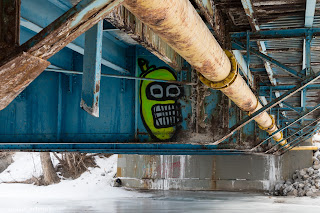 This was meant to be an arty shot of icy reflections. If there'd been 3 rocks in an artistic triangle I'd have  been a lot happier with it, but I wasn't about to hump 2 more rocks onto the bridge just to drop them. 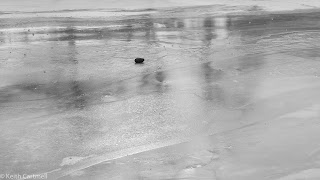 You can see that same rock off in the distance. This is the pedestrian bridge over the Elbow, between 9th ave and the Bow river. I like the nice clean lines, unlike the cluttered mess of the first bridge. The only difficulty was essentially standing on some homeless person's front porch. There is a bit of an alcove in the bridge structure where someone has been sleeping. 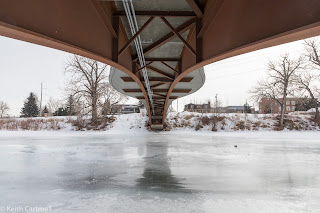 I like that there is space for people to take in the view without getting in the way of people that are just passing through. Looking to the left in this photo is where Elbow joins the Bow. I suspect that there are some nice photos to be had there, if the light is right. The ones I got were blah.

There's lots of bridge construction happening. Closest to home are new bridges over Fish Creek  and the Elbow for the ring road, along with lots of interchange bridges. Crowchild trail is being widened and about time too, that's been a major bottleneck for decades. Macleod trail has a recently completed (I think) double diamond bridge at 162nd, and a new bridge for the ring road.

Construction is supposed to start on 9th Ave over the Elbow going into Inglewood, which is going to be interesting to see how they do it. Unlike the recently opened zoo bridge, they can't close off 9th Ave for two years of construction. Can they? There's some vacant land nearby, maybe they'll build the new bridge there, then one weekend remove the old bridge and lift the new one in place. That would be cool to watch. Let's just hope the engineers do their sums correctly, and it doesn't turn out like that pedestrian bridge over Shaganappi Trail that was 11 cm too short.

It's not really a bridge, but there's lots of work happening on the deck of the Glenmore dam so the bike path is closed for a couple years. It's not really a bridge, but there's a BRT underpass being built at 14 St and 90 Ave.  Those are just the ones I know of off hand, without doing any research. There are probably more, and that's not even talking about road widening and other construction projects.

In the mean time, getting anywhere is going to take longer. For obvious reasons the construction companies restrict access to the building site, and that means lane closures or restrictions. This just sets off the road rage idiots, who feel that it's all happening just to inconvenience them personally. It's probably going to surprise a few distracting driving idiots who think they can do their normal social media thing as they drive and realize too late the lanes have changed. I feel for the people around them.

Email ThisBlogThis!Share to TwitterShare to FacebookShare to Pinterest
Labels: Bridges