Eye take another kind of selfie

Yesterday I published a reflection photo that was not quite a selfie. You can see it here. I've had some very nice comments on it, thank you very much. I have to admit I'm quite taken by the colours. I'm in it, but the only way you'd know it's me is because I've told you. Look again.

Weather was crap on Friday and nobody wanted to join me for the walk on Fish Creek so I bailed. Sunday both me and BRBE were due for an hour run. Neither of us wanted to run indoors on the track or treadmill, but we were reluctant to run outside with a bunch of inches of fresh snow over some random ice left over from the last Chinook.

I suggested she dig out her skis and I go on snowshoes, and go for whatever length of time felt right. That seemed like a good compromise, and off we went. Once you get on the river it's a wonderful walk full of views I've never seen before. It turned out to be 7.5 K in 2 hours, for anyone that's keeping track. I got some lovely shots, and I'll spread them out over the next few days. 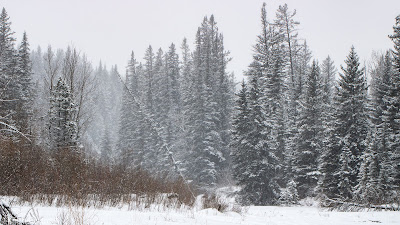 The 100 mm macro lens has been getting a real workout lately. I've been in the mood to take macro shots during my walks, but it's good for other photos too. In fact, it's a superb lens. The more I use it, the more I love the image quality. The trick is knowing what it will frame, and being prepared to move around to get the shot. Or carefully take several shots and stitch them together in a panorama, like this.

Michelle was surprised how far away I had to be to get a torso shot, and astonished how close I could get. I'm not sure how she wasn't constantly blinking in this shot. This isn't cropped at all. 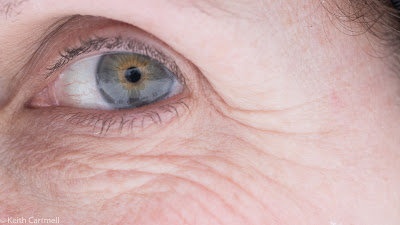 Now look closer. You can see a reflection of me taking the shot, plus the shadow of her eyelashes, and some of the river valley background. I think the end of the lens hood was only a few inches from her eye. She could send it to her ophthalmologist for an opinion about the health of that eye.

I was in the pool for a swim today, but my inner basking shark took over. I spent lots of time in the hot tub, and yay, it's a rest day tomorrow.