I wore the socks, but

So let's just say that wasn't my best swim ever.

Both arms had reverted to Pastafarianism at the same time, being weak and feeble noodley appendages. My legs felt heavy, and I could feel them dragging in the water. Even for as little distance as 100 m, I could feel myself slowing down and my stroke going all pear shaped. I timed a few things, but there's no point talking about it. Slowest swim in a while. Enough of that.

Friday was a rest day. Saturday was a work day, cleaning and tidying.  I didn't think it had taken that much out of me. This is about done, as tidy as it gets. 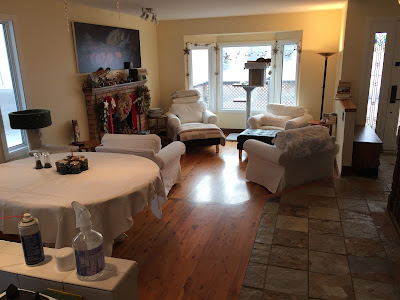 After our swim we waded through a zillion kids doing a swim meet. The stands were full of proud parents watching their offspring. I was thinking I might do a run or a spin later in the day and so put on socks for that. In the mean time I'd been struggling with things. I keep my car keys a certain place. If they aren't there (very rarely) they are in my jacket pocket. This morning I was all set to head out and realized my keys weren't there, or there. I ended up swiping Linda's keys out of her purse.

Then almost every light orange on the way to the pool. Good thing I wasn't in a rush. Still thinking about the keys. Swimming, thinking about the keys. With the swim meet parking is in short supply at Talisman. I'm trying to get out of my spot, with a guy in a red pickup clearly wanting it, sitting so as to make it very difficult to get out. I was tempted to turn the car off, get out, wave to him, and head back into the building. But coffee called and I managed to escape, hitting more orange lights.

More searching at home. I was beginning to wonder if I'd somehow dropped them at the neighbour's place while checking it. But no. Linda found them, in the car, on the back seat, right about where I'd have put the swim bag. As soon as she said so, I remember them slipping out of my hand as I dragged in a bunch of stuff from the last time I had the car. Then it slipped my mind. Sigh. Anybody know any good on-line tests to see if you've got early onset dementia?

In the end I didn't do either the spin or run. The cats captured me, forced me to give them a lap, and we all had a nice snooze in the sun. That isn't such a bad thing for a Sunday afternoon. Plus a very nice chat with some neighbours, one of whom just got back from Hawaii. And putting some chicken on the BBQ.

One of my buddies was going for a run, starting this morning at my favourite beach. It's been a little over a year since I've been there, and I'm missing it. I hope she took lots of pictures. And then on the way home, she has to, she just has to pass a certain bakery, though with all the treats in the house, it's not preying on my mind quite so much.