For the last little while I've been growing a tusk. My doctor said it was nearly exactly the material our fingernails are made of, and it was on my nose, so tusk is reasonably correct. It started growing quite suddenly. At first I thought it was a scab from scraping my nose somehow, then it kept growing.

At my annual physical I mentioned it, of course, and he said it was easy to deal with, and likely not a big deal. Today was the day for removal. A needle, a knife, and a bit of gauze later it was all over but the analysis. He doesn't think it's anything untoward, but wants to be sure. 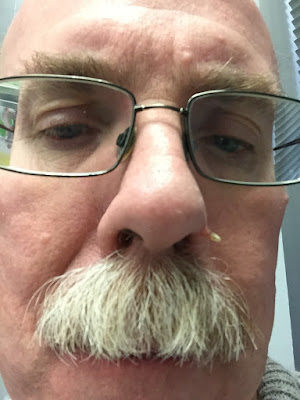 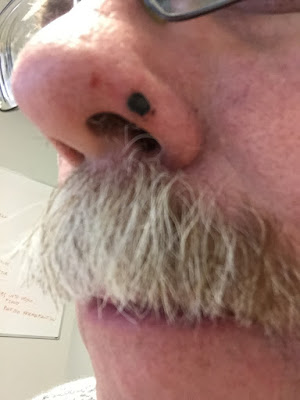 Which led to this exchange. 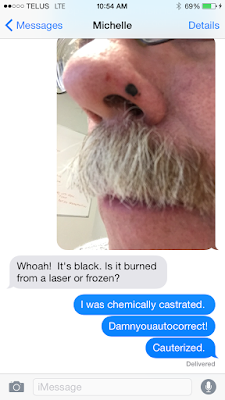 So there it was on my nose, for several months. Not one person mentioned it to me. I figure there are two possible explanations:

I'm not sure which explanation I prefer.

(There was a long bit here where I segued from the not noticing, to the technical shortcomings of our vision, to the handicaps our thinking places on our vision, to the current refugee issues. But it all got out of control and I don't think it made much sense, so I cut it out.)

(Then there was a segue into this being the most recent example of my body breaking down, to organizational breakdowns in the Alberta economy, and federal transitions of power, which tied back to the first one, on seeing the problems clearly, and dealing with them as such. But that got out of hand as well, so I cut it out. This could well be the longest blog I didn't actually publish. Now that I think of it, maybe I should have saved it as a draft. Oh well.)

In other news, the plank streak is still alive, but I've been a slacker otherwise. Yoga was more like a pilates session.