The SUAR fan club does Weaselhead with a guest

We've been planning this run for weeks. Obsessing over every little detail, wanting it to be perfect. Well, maybe it wasn't quite like that, but we've been talking about it for some time, and today we finally did it. This is part of the run course for the Calgary 70.3, which both Deb and I will be doing. T2 is just to the right of the top red dot. Those interested in the actual run course can go look it up. The interesting part is down the hill into Weaselhead, across, and up the other side. The run course goes further then comes back. We turned around and went back. 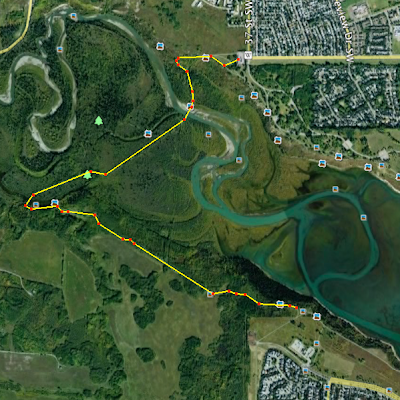 Here's what T2 looks like this morning waiting for them to arrive. It's calm and quiet, though the clouds are kind of dramatic. I was surprised how many people were out. Lots of runners, walkers, and a few hikers. One couple doing yoga in a grassy area. Dog walkers. A few people on bikes. 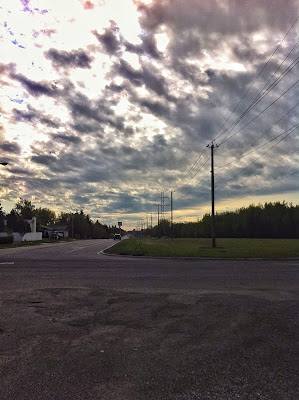 So here we are in the parking lot, chatting up a storm. You all know which I am, and I'm sorry I ruined the picture. The two good looking ones are Sophia and Deb. They will be posting their own pictures on their own blogs. Sophia can't run at the moment but we worked out something. I rode my hybrid up. It's probably about as fast as driving there would be, or faster. Plus it got me warmed up, even though it was a cool day. I dropped the seat a bit so Sophia could ride with us. 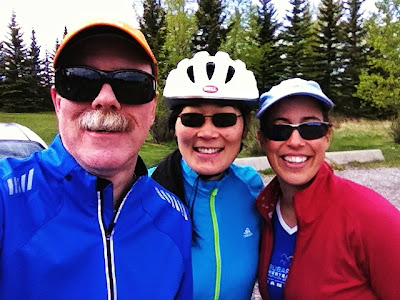 After we took the shots Sophia and I realized we were both wearing our fan shirts, and wanted to get another photo. This one was really dark for some reason, and I had to play with it in Snapseed to get it even this good. 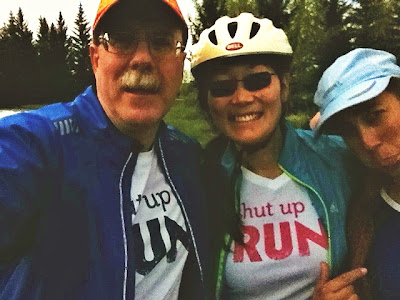 We didn't do the whole loop in N Glenmore, but we did find a bathroom. Deb and I were comfortable running at the same pace, chatting away like mad, with Sophia right behind us, whipping us on, exhorting us whenever we slowed down even a little bit. Once we got running it was the perfect temperature. No bugs.

Coming back I had to stop and take these shots. We had run over the bridge and followed the path south and left out of the picture. We ran to where the 37 St path joins up and turned back. I think we did between 8 and 9 K, but I'm not really sure. Deb may have Garminized it. The water level is way down in the reservoir so there is much more wetland to see. I'm sure the ducks and other critters like it. The views are beautiful! This is looking south and west. 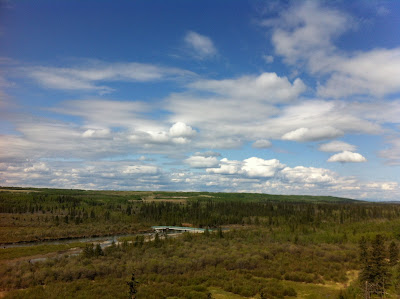 I used Snapseed to push the photo a bit using the various filters. 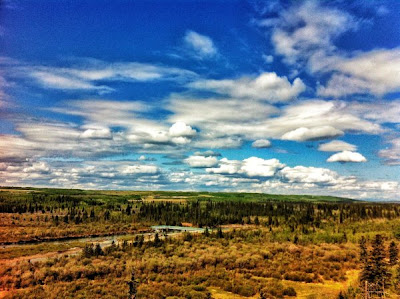 Then pushed it a bit more. I really like this shot. 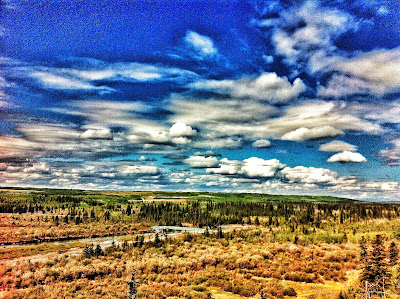 Here's another view of the wetlands, looking south and a bit east. 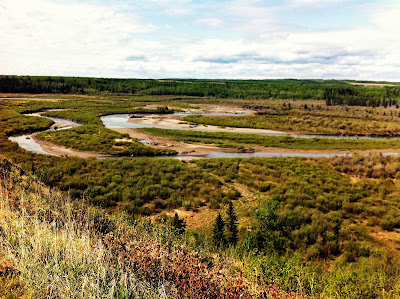 Standing at the same place I took this panorama shot. If you look carefully you can see the mountains.

Normally I'm not big on riding or working out with other people, but this was fun! It's the first time Deb and I have met in person, though we've been mutual blog readers for a while. The three of us have quite a bit in common re: weight issues, deciding to get more fit, and balancing our lives overall.

Deb and I have made tentative plans to ride the Chinook Oly bike course, though there aren't many weekends to choose from. Hmm, in fact, only the weekend before Chinook is possible for me. In turn, I want to ride the 70.3 course again. It's been a while and it's beautiful, though the part through Cochrane is a bit hairy in places.

I'm actually quite impressed with both my buddies. They have made some life changing decisions about becoming more fit, and challenging their own assumptions about themselves. They've kept at it, balancing family, and work, and everything else. They are living proof that people can change their lives, gradually pushing their minds and bodies to places they wouldn't have believed possible a short time ago. Sophia is at least thinking a little bit about triathlon, though that won't happen for a while. That's ok. Yes, we encouraged her, just a bit.

In other news, I'm on a low residue diet this weekend. Monday I chug a gag inducing liquid that has other inducing properties as well. I'm already stocking the guest bathroom. No FaceTime calls on Monday please. For your own good. Then Tuesday portions of my anatomy that have never seen daylight are captured on video. I think that's all I need to say about that. For the people who have been encouraging me to get a Twitter account, I was seriously considering Tweeting a moment by moment account of my adventures. It seems a suitable revenge.