Monday was a good core session as I was working through the finer points about the rant on doors. The very next day I saw a new one. A guy is watching the elevator TV. The doors open for his floor, and he slowly makes his way toward them while watching the TV. Then he stops, in the doorway, head craned up to read whatever was so fascinating. The guy behind managed to get stopped in time, but blew into the hair of the first guy. I suppose that's better than pushing him out of the way.

Tuesday morning I was in the pool again, and it felt much better. Swam a half hour, with a bit of it dolphin kick and some backstroke to cool down. Most of the freestyle was at a 2 m per 100 pace, but the last couple laps started coming apart on me. I started by sharing a lane, but he moved over once he realized his 1 length sprint speed was barely faster than my taking it easy, getting into the groove pace. With any luck by the time some of my fast swim buddies show up, I'll be looking respectable again.

A month or so again I ran with Katie, my IMC coach. I wanted her to take a look at my run form, such as it is. It wasn't as bad as I had feared, but she gave me a bunch of things to work on. Our plan was to do it again for a longer run to see how my run changes over time, and how my stride changes at different speeds.

Today I ran an hour, and she followed along on her bike. We went between 8 and 9 K which is pretty good considering that some of it I was running quite slowly. Recovering from running fairly fast. How fast? My heart rate peaked at 169 bpm, which is the highest I've ever, ever seen it. Normally about 150 I start getting uncomfortable, and since I've never seen it past 157 before, I'm surprised I was feeling as good as I did.

Started easy for a while, then picked it up to a fast but still comfortable pace. Then back to an easy pace. Then it started. Fast. About 10 K pace or so, but I've really no idea how fast I was actually running. It felt good though. Lungs working hard, but my legs were happy. Then easy for a bit, then another harder bit. I think that's where I peaked since I walked for a few seconds after the fast bit. Another easy, then fast bit, but not quite as fast. This was where I was running my best, I think. I was at the upper end of zone 3, about 149 bpm, but my breathing felt comfortable, and my legs were good with it. After some easy recovery, there was the dreaded gradual build, 4 times. Then recovery and cool down.


Other things. The East Village pathway has become really nice! I used to be a bit nervous about going through there because it was the homeless hangout and drug deal central. Under the Edmonton Trail bridge I saw many drug deals being done, and once a hooker giving a blow job. Not the classiest area of town, but the change is amazing. Certainly along the path towards Fort Calgary is a really nice walk now, and getting nicer.
Here's a map of where we went. I'm not totally sure how far we went along Memorial before the path was fenced off and we turned around. 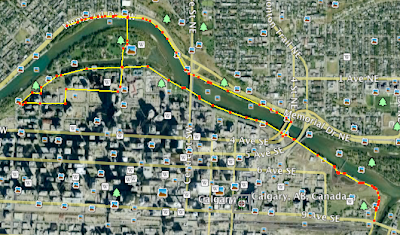 We got a spatter of rain but that's all. I walked back to the office after to pick up my stuff, and walked to the car. That made for a nice cool down.

Email ThisBlogThis!Share to TwitterShare to FacebookShare to Pinterest
Labels: Maps