You don't want to know how cold it is

During my swim yesterday I was surprised when the kids joined us. I thought it was a Tuesday and Thursday sort of thing, but M set me straight. Every morning, different groups of kids. Oddly enough, the rest of the pool was almost empty, me and M, and another person. I guess most people don't like the splash and thrash the kids put up, but I don't mind. It's good to swim in choppy water, and that's about as choppy as it gets in a pool. I loved listening to the coach reaming out the kids for being lazy and slow.

Swam 45 minutes, mostly easy, and stretched really good after. My left shoulder has been somewhat painful and was slow to warm up. I was feeling kind of clunky in the water.

Then yoga in the evening. For a gentle night it damn near killed me. My legs were very tired and sore after. All day Wed my hips and glutes were bothering me. I went for a bit of a walk through the +15 system at lunch, for the first time in a while. That's kind of fun. I checked out the bridge between Holt Renfrew and the new building where Penny Lane used to be. (The map shows a pit just below my Ruler box, but there's really a building there now.) It's there, and I could see people walking around on the +15 level on the other side of it, but the bridge itself wasn't open. To find out if the bridge is open from that building to the parkade in the building to the west, I'd have to walk the long way around the loop, which is about 2K. Here's a map of a chunk of downtown, showing the route to walk indoors to see if the other bridge is open. This is only part of the +15 system, and yeah, you'd be right in thinking we love the system when it's this cold out. 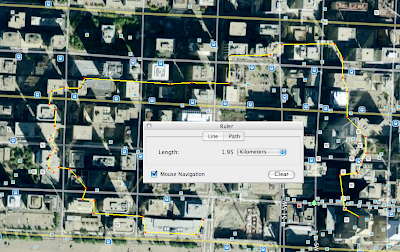 The intent was to get on the bike when I got home, but that didn't happen. My legs are still a bit creaky and I'm feeling really full and a bit bloated for some reason. Even a good core session probably isn't a good idea. Somehow when it's this cold outside, the hibernation instincts kick in and you just want to snuggle into a blanket with a cat.